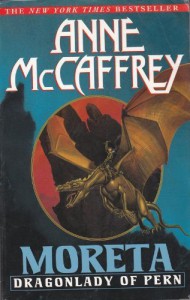 The ending was extremely sad! Found myself close to tearing up, which is surprising considering that this book was quite a snoozefest for me.

I enjoyed the character Moreta. Compared to her biggest fan years later, Lessa, she is a nice mix of carefree and responsible, depending on the situation. I think she is my favorite Pern weyrwoman so far.

Sh'gall was a raving lunatic. Really one-dimensional character for a man. Alessan interested me, and I liked his "forbidden" romance with Moreta, but it was so backseat to the plot that it didn't bring this book up in my favor.

The plot was very slow. The focus is on an infection that has spread through Pern and is killing the majority of the population. The famous Moreta's Ride of lore doesn't happen until the very end of the story - which makes sense if you think of the outcome. However, the time leading up to this was tedious.

I thought there was too much dialogue and not enough adventure. The most adventure in the novel is the couple of times Moreta heals a dragon or a rider. Much of the story spends its time thinking about how the infection spread and how it can be stopped.

Just seemed like every scene was two people talking about what they could do. The middle part dragged on and on.

And I really tried to focus on all remembering all the secondary characters, but their names sound too similar, and no one ever seems to get a character description in Pern series. Probably part of the reason why it was hard for me to pay attention.